In his latest paper, Dr. Vettermann solves a complex problem facing hemophilia A scientists and clinicians for years 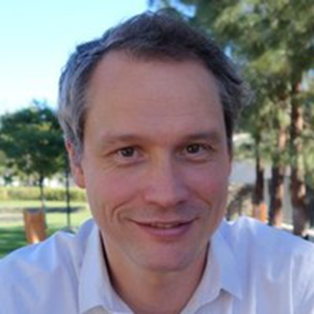 Senior Scientist Christian Vettermann, Ph.D., joined BioMarin in 2015 as a bioanalytical team lead for hemophilia A research. In this role, Dr. Vettermann and his collaborators have made fundamental scientific discoveries that are shaping the field more broadly—including a key explanation to a problem facing hemophilia A scientists and clinicians for years, which has just been published in the prestigious biomedical journal Blood. We talked with Dr. Vettermann about this pioneering research and its anticipated impact on hemophilia A patients around the world.

BioMarin (BMRN): With your new paper in the journal Blood, you describe a solution to a problem that hemophilia A scientists and clinicians have had for quite some time. Would you share the background behind this critical new discovery?

Christian Vetterman (CV): Sure, I’d be glad to. Hemophilia A is the most common type of hemophilia. It’s a genetic disease caused by a deficiency of a protein important for blood clotting, called “factor eight” (FVIII). When blood vessels are injured, clotting factors help repair and secure breaks in the vessel walls and stop the bleeding. People with hemophilia A are missing or have low levels of FVIII. As a result, without adequate medical intervention, they can have bleeding within joints that leads to chronic joint disease and pain, as well as bleeding into vital organs like the brain, causing long-term health issues and even death.

Treatments for hemophilia A typically aim to increase FVIII activity levels in blood plasma. To measure the effectiveness of these treatments, scientists and clinicians have traditionally relied on two standard assays, or tests: the one-stage clot assay, and the chromogenic-substrate assay. For early hemophilia A treatments, such as human plasma-derived therapies, the two assays produced relatively comparable FVIII activity measurements.

Yet when you use the assays to measure the current standard of care—recombinant FVIII therapy—the tests can produce different results. The assays also produce different results for hemophilia A gene therapies being researched, which we were the first to measure. Obviously, having measurements that don’t agree with each other is a problem. Which one do you trust? Researchers have been trying to solve this problem for years, and we were the first to propose and substantiate a plausible explanation.

BMRN: What questions led you to this breakthrough about testing hemophilia A treatments? 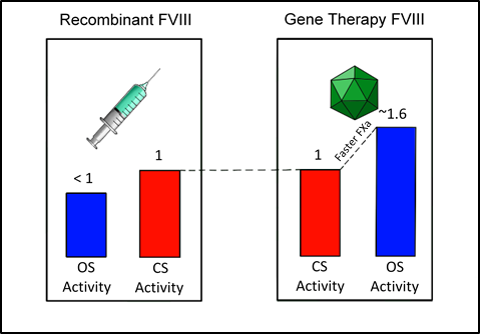 CV: An important starting point of our investigations was a large field study that we conducted, showing remarkable consistency of the diverging FVIII measurements in labs around the world. This phenomenon is clearly independent of assay kit reagents, gene therapy dose, FVIII expression level or time after gene therapy administration.

From there, we asked: Is there one assay that provides comparable measurements for recombinant FVIII and hemophilia A gene therapy? When we compared FVIII activity as measured by the one-stage clot (OS) assay and chromogenic-substrate (CS) assay, we saw noticeable differences between recombinant FVIII and gene therapy in the OS assay, but the CS test results were generally consistent for both treatments (when compared based on the same quantity of FVIII protein). You can see this in the graphic above.

The results are helpful for researchers working in the recombinant FVIII field who hadn’t been able to fully answer the question of which assay to use, since we showed the CS assay really is the one that can be utilized across modalities and likely has less susceptibility to interference from circumstantial factors.

I should note that the OS assay remains clinically meaningful for hemophilia A gene therapy: the OS and CS measurements are tightly correlated for this therapy and might even be translatable by using a simple conversion factor. Nonetheless, our findings could lead the field to rethink assay selection for routine clinical testing for novel hemophilia A therapies—particularly in the U.S., where most laboratories still prefer to use OS, since it’s cheaper and easier to implement in the lab.

BMRN: In addition to identifying the CS assay as suitable for use in hemophilia A gene therapy research, did your research reveal any other discoveries?

CV: We also wanted to know why the assays were producing different measurements in the first place. For ongoing research in gene therapies in particular, the measurement was about 1.6 times higher with the OS than CS assay. So I engaged with key biochemical experts in the coagulation field, Drs. Steffen Rosen and Stefan Tiefenbacher, to work with BioMarin on this mechanistic puzzle. We found a two-part answer to this question.

The first part relates to kinetics, or the rate of reaction that occurs during the assay. When triggered adequately, we found that the FVIII produced as part of gene therapy research shows an initial burst of activity and begins to react more quickly than natural FVIII in normal plasma—causing the coagulation process to start faster. After this initial kick-start, the kinetic pace of gene therapy FVIII then starts to level off and appears to fall in-line with the pace of natural FVIII.

The second part relates to the format and length of both assays. The OS assay is conducted over a very short period of time and reads out FVIII activity after about one minute. In contrast, the CS assay takes about 5 minutes to read out. We realized that the OS assay was reading out at the time when gene therapy FVIII was undergoing its initial burst of activity, while the CS assay was reading out later, when the pace of activity had become similar between gene therapy and natural FVIII. Together, these discoveries help explain the higher OS measurement for gene therapy FVIII. It’s important to note that no gene therapies for hemophilia A have been approved for use or determined to be safe or effective and these results relate to ongoing research into hemophilia A.

I also want to share one important, related observation: despite the faster onset of coagulation with gene therapy FVIII, we found that the overall levels of thrombin (an enzyme that directly mediates blood clot formation) were unaffected at the end.

BMRN: How has the field reacted to these discoveries that will help to shape the future of hemophilia A research?

CV: We’ve now presented our work at several scientific conferences, and there’s consensus that the CS assay is a reliable method when investigating gene therapies for hemophilia A. In the early days, however, it took some convincing!

This work is a prime example of an investigation where the focus remained on the data, even if they did not show what we wanted to believe

While we were required by Health Authorities to address the diverging measurements in order to legitimize FVIII activity as a primary endpoint in clinical trials, we are still assessing the physiological and clinical relevance of this difference. Nonetheless, selecting the more conservative CS measurements using rational scientific arguments as part of our research program has brought us credibility with our stakeholders.

Ultimately, the publication of our work in Blood is a big achievement in the interests of patients—assuring them that BioMarin operates under the highest degrees of transparency and scientific integrity.

No gene therapies for hemophilia A have been approved for use or determined to be safe or effective.

For a full copy of Dr. Vettermann’s paper in the biomedical journal Blood, please click here.

Each of our seven approved therapies reset the standard of care for the conditions they treat.