Christian Vettermann is a Principal Scientist who joined BioMarin in 2015 to lead the bioanalytical team for hemophilia A gene therapy research. The group develops and validates test methods to measure biomarkers, antibodies, and drug concentrations to support efficacy and safety evaluations in clinical and non-clinical studies.

When Assays Lead to More Questions

Treatments for hemophilia A typically aim to increase FVIII activity levels in blood plasma. To measure the effectiveness of these treatments,

scientists and clinicians have traditionally relied on two standard assays, or tests: the one-stage clot assay, and the chromogenic-substrate assay. For early hemophilia A treatments, such as human plasma-derived therapies, the two assays produced relatively comparable FVIII activity measurements.

Yet when you use the assays to measure the current standard of care—recombinant FVIII therapy—the tests can produce different results. The assays also produce different results for hemophilia A gene therapies being researched, which we were the first to measure. Obviously, having measurements that don’t agree with each other is a problem. Which one do you trust? Researchers have been trying to solve this problem for years, and we were the first to propose and substantiate a plausible explanation.

An important starting point of our investigations was a large field study that we conducted, showing remarkable consistency of the diverging FVIII measurements in labs around the world. This phenomenon is clearly independent of assay kit reagents, gene therapy dose, FVIII expression level or time after gene therapy administration.

From there, we asked: Is there one assay that provides comparable measurements for recombinant FVIII and hemophilia A gene therapy? When we compared FVIII activity as measured by the

one-stage clot (OS) assay and chromogenic-substrate (CS) assay, we saw noticeable differences between recombinant FVIII and gene therapy in the OS assay, but the CS test results were generally consistent for both treatments (when compared based on the same quantity of FVIII protein). You can see this in the graphic below. 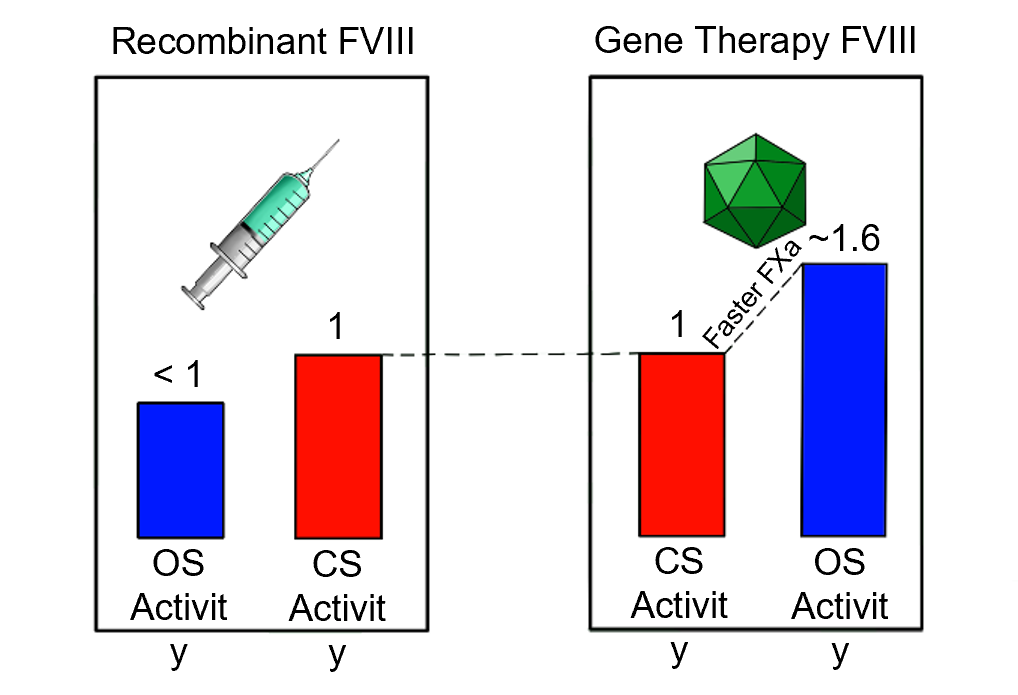 The results are helpful for researchers working in the recombinant FVIII field who hadn’t been able to fully answer the question of which assay to use, since we showed the CS assay really is the one that can be utilized across modalities and likely has less susceptibility to interference from circumstantial factors. I should note that the OS assay remains clinically meaningful for hemophilia A gene therapy: the OS and CS measurements are tightly correlated for this therapy and might even be translatable by using a simple conversion factor. Nonetheless, our findings could lead the field to rethink assay selection for routine clinical testing for novel hemophilia A therapies—particularly in the U.S., where most laboratories still prefer to use OS, since it’s cheaper and easier to implement in the lab.

Answers found along the way

We also wanted to know why the assays were producing different measurements in the first place. For ongoing research in gene therapies in particular, the measurement was about 1.6 times higher with the OS than CS assay. So, I engaged with key biochemical experts in the coagulation field, Drs. Steffen Rosen and Stefan Tiefenbacher, to work with BioMarin on this mechanistic puzzle. We found a two-part answer to this question.

The first part relates to kinetics, or the rate of reaction that occurs during the assay. When triggered adequately, we found that the FVIII produced following gene therapy treatment shows an initial burst of activity and begins to react more quickly than natural FVIII in normal plasma—causing the coagulation process to start faster. After this initial kick-start, the kinetic pace of gene therapy FVIII then starts to level off and appears to fall in-line with the pace of natural FVIII.

The second part relates to the format and length of both assays. The OS assay is conducted over a very short period and reads out FVIII activity after about one minute. In contrast, the CS assay takes five minutes to read out. We realized that the OS assay was reading out at the time when gene therapy FVIII was undergoing its initial burst of activity, while the CS assay was reading out later, when the pace of activity had become similar between gene therapy and natural FVIII. Together, these discoveries help explain the higher OS measurement for gene therapy FVIII. It’s important to note that no gene therapies for hemophilia A have been approved for use or determined to be safe or effective and these results relate to ongoing research into hemophilia A.

I also want to share one important, related observation: despite the faster onset of coagulation with gene therapy FVIII, we also found that the overall levels of thrombin (an enzyme that directly mediates blood clot formation) were unaffected at the end.

We’ve now published our work and presented it at several scientific conferences, and there’s consensus that the CS assay is a reliable method when investigating gene therapies for hemophilia A.

While we were required by Health Authorities to address the diverging measurements in order to legitimize FVIII activity as a primary endpoint in clinical trials, we are still assessing the physiological and clinical relevance of this difference. Nonetheless, selecting the more conservative CS measurements using rational scientific arguments as part of our research program has brought us credibility with our stakeholders.

Ultimately, the publication of our work in Blood is a big achievement in the interests of clinicians hemophilia patients—helping them to better understand the FVIII measurements taken after AAV gene therapy.

No gene therapies for hemophilia A have been approved for use or determined to be safe or effective.

As we reflect on the progress of the last quarter century, we take this opportunity to also look forward to what’s next for BioMarin. In our continued pursuit to maximize impact for patients, we continue to ask ourselves: what more can we do? The outcome of this ongoing self-assessment has helped bring clarity to how we can best deliver on our purpose – to transform lives through genetic discovery.

The contents of this post were first presented at a poster talk during the annual scientific meeting of the American College of Allergy, Asthma & Immunology’s November 2022 symposium. Hereditary angioedema (HAE) is a genetic disorder that results in unpredictable episodes of severe swelling and can be life threatening. The swelling can affect different parts […]

By interrogating the human genome, we’ve designed therapies that address the root cause of genetic disease. That’s a guiding principle for how we approach our research at BioMarin, and nowhere is that more true than in our work researching gene therapy. As part of our commitment to expanding our technical expertise, we’re looking into many […]

We use cookies on our website to give you the most relevant experience by remembering your preferences and repeat visits. By clicking “Accept”, you consent to the use of ALL the cookies. However you may visit Cookie Settings to provide a controlled consent.
Cookie settingsACCEPT
Manage consent